These are five of my current favorite songwriters. By current, I mean what they’re doing now, which would eliminate Lennon and McCartney, though for completely different reasons. And one great album (usually) isn’t enough to qualify. They are not in any order other than as they occur to me.

1. Jon Dee Graham writes about Big Issues that matter to all of us. Check out Faithless, Wave Goodbye, Laredo (Jim Morrison would have loved to have written a song this good), I Don’t Feel That Way, Beautifully Broken. A great rocker, he and Mike Hardwick play like one amazing four handed guitarist. Lives in Austin, was in the True Believers with Alejandro Escovedo, played and recorded with John Doe and Dan Stuart. Jon Dee’s songs are dark, and he sings them in a weary, gravelly voice, reinforcing that impression, but while his songs are about bad times, they are full of hope. Faithless is about faith; Wave Goodbye about his anger/sadness toward someone who gave up; Laredo, well that one’s just dark (“We shot dope till the money ran out/money ran out”), but Something Wonderful (is Gonna Happen) and Something to Look Forward To express how much a man can endure with just a little faith and hope.

2. Michael Fracasso: One horrible rainy day, the kind you can’t see more a car right in front of you if he doesn’t have his lights on, the kind we should have pulled over but we had a show a few hours away, Sherry and I were driving in between trucks when Michael’s high, unearthly voice, came over the IPod: “Outside the Rain is Falling….”  After that we switched to our all Michael Fracasso channel, so we wouldn’t miss any more messages. Michael and his high lonesome voice sing sing songs about the past that are so real you feel as though you were there (1962, Big Sister),  and he can also be a funny and biting  rocker (Wrong Foot, Eloise).  His Back to Oklahoma CD (also released as part of Retrospective) is incredibly beautiful acoustic based music (he’s backed only by the incredibly empathic Charlie Sexton) (Never Enough) recorded live at the Blue Door in Oklahoma City.  His latest CD, Saint Monday, finds him equally adept at rock.  And he does a great cover of Working Class Hero. His songs have a socially conscience thread that runs through them, reflecting his background (if not the attitude) of growing up in the steelworking town of Steubenville OH. Michael first made his name in Greenwich Village before moving to Austin in the early 90s.

3. Jeff Talmadge:  though he currently lives in Atlanta, Jeff Talmadge is one of Texas’ great songwriters, even if he remains a secret to much of the larger world. It’s not that no one’s heard of him: he’s topped the Folk, EuroAmerican, and Roots Music Report charts, but as the Great Tim Henderson said to me: “Driving to Blissville is an obscure song with great lyrics. If Townes (Van Zandt) had written it, it wouldn’t be so obscure, but it wouldn’t have any better lyrics.” In Jeff’s songs, you can feel the dry land, the heat, the lack of rain. His characters are discouraged by the present, hopeful for the future. Most can’t get over a woman lost, and they all travel. Check out:   Driving to Blissville, The Hard Part’s Letting Go, Chasing Grace, 40 Days of Rain, White Cross, Lie to Me. In all of them, Jeff writes about the darker side of human emotions with compassion and dry wit.

4. John Wort Hannam writes as well about the seafaring towns of his native Canada as Bill Morrissey used to about New England. A way of life is falling apart and usually a love is too.    Wrecking Ball combines both; Infantryman is the best song written in the aftermath of the Iraq War; We’re Getting By, Buy Another Round, and Blue Collar are songs about people who work with their hands, and how they get by the Canadian winters. The specifics in his songs are Canadian, but you’ll recognize the characters. In the Woody Guthrie tradition, John writes as well about Blue Collar struggles as anyone today.

5. John Lilly makes music from the hills of West Virginia that’s timeless, and by that I don’t mean old, just that it seems like it’s always existed, always will, and could come from the past or the future. Think Hank Willliams if he had been rockabilly, with a large dose of high lonesome mountain music thrown in. He’s funny, devastating, heartbreaking. Until his new CD came out, I would have told you to buy the solo live one, that his playing and singing and persona are so out there as to be almost punk (in the old meaning of the word before it became stylized). But his new CD, Cold Comfort,  is brilliant from beginning to end, with a full band that is brilliant but does not get in his way, led by the incomparable Bill Kirchen on guitar   Tore Up From the Floor Up, Last Chance to Dance, Spirit, Broken Moon, Cold Comfort, Two Miracles, the rousing Come on and Go, the beautiful Somewhere in Texas. A terrific cover of Gasoline Alley serves as a reference point for John’s music. 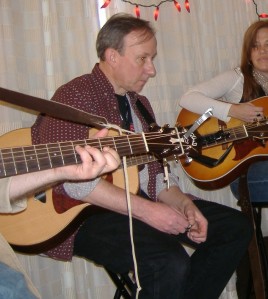